“Que Te Vaya Bien” is the newest hit released by Rey on Spotify and other platforms. Reynaldo Ivan Peña is better known as Rey, but he also goes by the moniker “El Montro” on social media. Rey is an artist and musician with 20 years of experience in the music industry.

He can play any urban music genre such as Pop, Hip Hop, Rap, Latin, or Dance music. His proficiency and love for every type of temporary music helped him create soulful and memorable hits like his newly released “Que Te Vaya Bien.”

The song “Que Te Vaya Bien” is basically about a power couple that could’ve been, but due to variable factors, the relationship never came to fruition. However, it is not a sad story about losing a great love and what could have been. Instead, Rey’s newest hit single comes from a perspective of strength and resilience.

“Que te Vaya Bien” translates to Good Luck, which is a final goodbye after a relationship ends. The beautiful words of the song imply the discovery of a romantic partner who is not sincere. Ultimately there is a feeling of good fortune for the truth was exposed and a promise that the same mistake will not be made again. This sentiment is clearly indicated throughout the song, especially in lines such as, “I should have listened when people warned me about you.”

Rey, better known as “El Montro,” often releases singles in both English and Spanish. “Que Te Vaya Bien,” a beautiful Latin song, contains music that was inspired by the smooth melodic combination of the requinto (lead) guitar, a second (rhythm) guitar, some bongos, and a solid atmospheric background. The composition combines mesmerizing lyrics with these top-quality sounds to create a memorable experience. 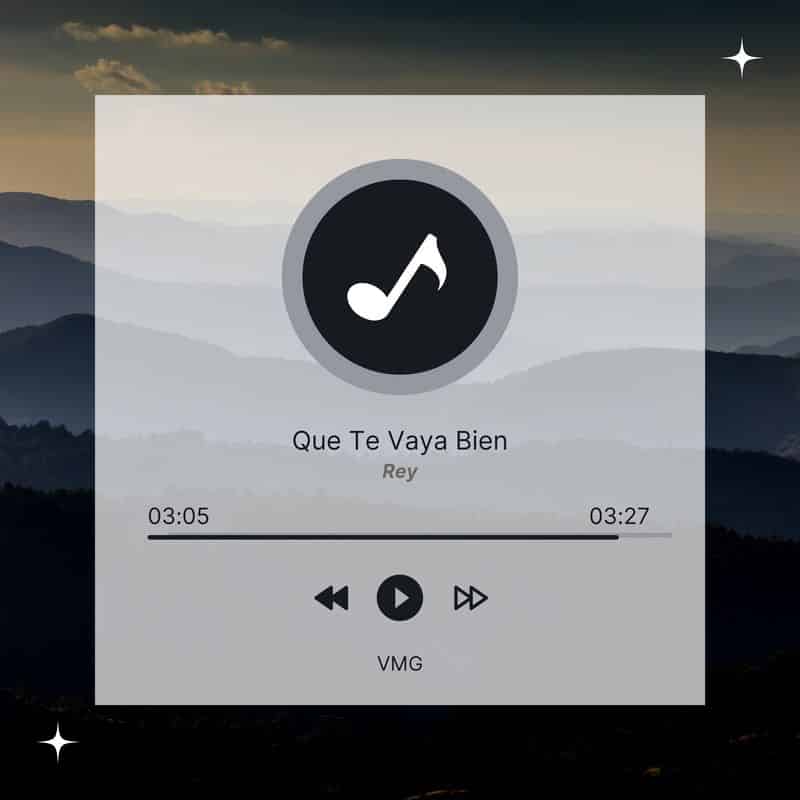 Rey is an internationally well-known music producer from the Bronx in New York who creates fresh music specifically designed for people to enjoy and have a good time. They can choose to relax and just have fun while listening to it, but many find themselves dancing the night away to his fun-filled beats.

Rey’s recent single, “Que Te Vaya Bien,” leans more towards Spanish music, specifically bachata and pop. This song, in particular, was based on a bachata melody. VMG Music is proud to be marketing the song and says existing and potential new fans can expect to hear it repeatedly in clubs or at parties.

Rey’s song, “Otra Pelea,” is also a Spanish song about Latin music. It stands apart from some of his other timeless classics, thanks mainly to the fantastic Spanish vocals sung by Agustina. “Otra Pelea,” also released in 2022, has received much praise and critical acclaim.

Rey continually stands out for beats inclined towards urban music and hip hop. Some of his other popular releases on Spotify include Worthy, Make You My Bitch, City and State, The Bronx, and Copiando Mi Estilo. Thanks to his unique background, writing, and musical abilities Rey, or “El Montro,” continues to gain more fans every year.

Since 2003, Rey has entertained audiences and grown in popularity worldwide by producing popular Latin and urban music. Many different genres are represented on his platforms, such as rap, hip hop, reggae, and R&B. Rey has dedicated 20 years to his successful musical career and continues demonstrating a constantly evolving sound.

Musical innovation is at the heart of Rey’s musical compositions. “Que Te Vaya Bien” is his platform’s newest single on Spotify. Fans will enjoy this production and are recommended to sample any or all of his other works.

Rey was born and raised in the Bronx for those interested in his background, and he enjoys bringing his life experiences into his music. He is also a huge fan of motorsports of all types and particularly enjoys following the Formula One racing circuit each year.

For more information about Rey, his music, and his inspirations, be sure to visit his website or follow him on social media at