One of the best known Catholic churches in the world and a testament to French gothic architecture, Notre Dame is one of the most amazing structures in Europe and a must-see tourist attraction if you are in France. Completed in 1345, Notre Dame has gone through an intense history, with numerous destructions and reconstructions, and has also been home to some of the most important artifacts in Catholicism. Its massive stain glass artwork and clock have become famous throughout the world, and it gained a legacy as being a sanctuary when surrounded by chaos and darkness. Take this article to be a brief history of the building and its importance, and visit it in person if you would like to learn about it in-depth. 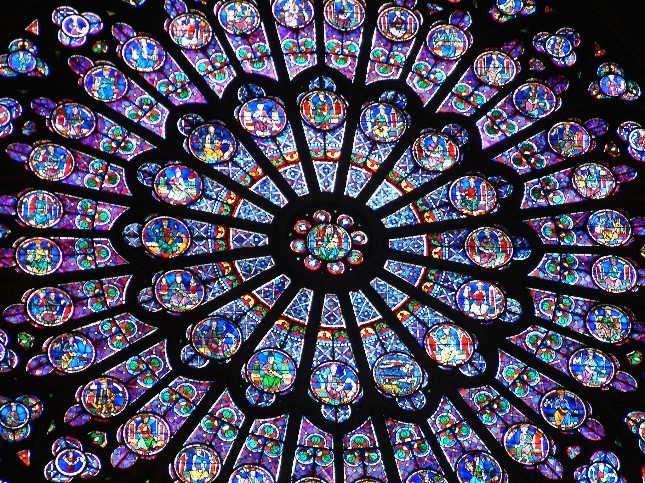 Records and writings going back to the time of Notre Dame’s creation can be difficult to find, but historians believe that Bishop Maurice de Sully is responsible for the design and beginning of the church. The Catholic church was a major factor at the time in France, so much so that the city was known as the “Parish church of the kings of Europe”. De Sully felt that the main church in Paris, Saint-Étienne, was too old and not majestic enough to be worthy of the eyes of the Catholic world. Constructed in the 4th century, Saint-Étienne didn’t have the modern day look that de Sully envisioned, and wasn’t large enough to fit the throngs of people that went to Mass in the city. Outside of the church, he sketched his designs for a church that was unlike any the world had seen. Arguments still exist today on who laid the cornerstone, de Sully or Pope Alexander III, but de Sully considered Notre Dame to be the culmination of his life’s work. He would commit most of his money and time into the construction, before dying in 1196. 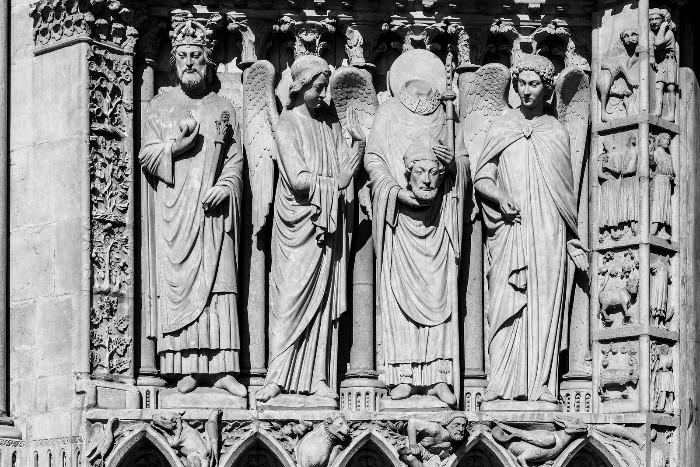 Numerous designs and architects were a part of Notre Dame’s construction, with the most significant advancement occurring in the 13th century. Jean de Chelles took inspiration from the Gothic Rayonnant style and remodeled the famed north transepts to show this. Pierre de Montreuil would do the same with the south transepts and designed the sculptures and faces that can be seen today. Telling the story of St. Stephen, local Parisian saints, and the story of Christ, they are considered to be some of the finest sculptures in the world. The massive north stained-glass window is directly inspired by Rayonnant architecture and makes an incredible photo with the sun shining through.

It was mentioned before that Notre Dame has had an intense history, and this truly can’t be understated. Beginning with the Huguenot riots in 1548, and continuing throughout the Second World War, Notre Dame has been a target to those trying to destroy a religious structure and a national icon. Not all of the destruction has been through war, however, as King Louis XIV and XV planned massive renovations to the church, as Europe was going through a phase of church modernization. This also occurred in 1845, as architects Jean-Baptiste-Antoine Lassus and Eugène Viollet-le-Duc were in charge of a controversial restoration program. The program lasted for over twenty-years, costing the city exuberant amounts of money, but added some of the now-famous sections of the church, such as the massive gargoyle sculptures. The latest revisions and restorations occurred from 1991 into the 21st century, with LED lighting being added in 2014.

Notre Dame was not under more danger, though, then during the French Revolution. Rededicated to the Cult of Reason and later, the Cult of the Supreme Being, the church became almost a mockery of its former self. Many of the treasures at the cathedral were plundered, and the heads from the transepts were chopped off as if they had met their fate from the guillotine. Many of the heads were found in a 1977 excavation and can be seen at the Musée de Cluny nearby. Luckily, the famous bells were not damaged and are still ringing today.

Speaking of the famed bells, the largest one, known as Emmanuel, dates back to 1681. Weighing in at over 13 tons, it rings to mark the hours of the day and various occasions. Ten bells make up the bells of Notre Dame, each a different note and were rung by hand until electric motors allowed them to be run without the use of manual labor. While Emmanuel is still original, the other nine are as recent as 2013, created to replicate the tone of the originals.

A large reason behind the fame and iconic status of Notre Dame is the book, The Hunchback of Notre Dame, by Victor Hugo. Created in 1831, it’s a story of Hugo’s view of church corruption and the effect that it had on Paris. His writing of the beauty and majesty of Notre Dame appealed to French citizens and brought renewed interest in the restoration of the building. Plays and musicals of Hunchback have done a great job of bringing prestige and interest to the building, letting new generations experience what Hugo was inspired to write about.

If you decide to visit Paris, a tour of Notre Dame should be near the top of your list of things to do. Besides the history of the building, there are certain things that need to be seen and experienced up close. Visit the catacombs that run underneath the building, see the massive organ, learn all of the mystique the church has to offer. It’s easy to see why Notre Dame has become an icon for France; it has the same characteristics as the French people. Strength and beauty, with a long history and culture. Take a tour of Notre Dame, experience it for yourself!

Read about Great Wall of China