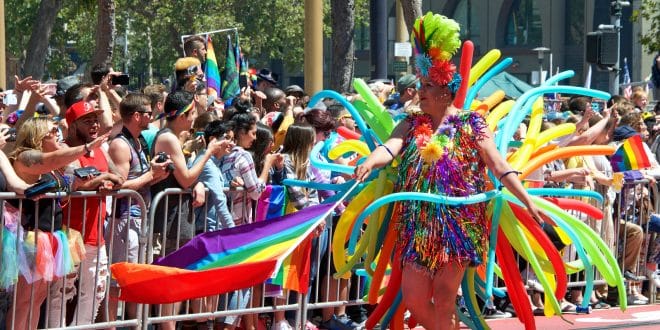 San Francisco has a long-standing reputation of being supportive of its LGBT community but this past weekend’s events left organizers and attendees disappointed. Most organizers approximated that close to a million people were planning to participate in the annual activities that included speeches, a march, and music to be performed by Kehlani.

According to an article published by the Daily Mail, the usual themes of peace, harmony, and acceptance were thrown out the window when a massive almost all female brawl broke out in the middle of the event. The fight that included more than a dozen participants and became very savage very quickly. Multiple videos of the battle were posted to the website youtube. According to some bystanders, the fight began over a question concerning the music set of Kehlani and if it was being shortened.

The woman who responded to the question was supposedly overtly rude. The questioner did not appreciate the tone used by the responder, so a shoving match quickly turned into a full-fledged street fight. Then other women joined in the battle which according to some became savage with some women not only being thrown to the ground, kicked and having their heads slammed into the cement. All of this commotion can be seen on any number of bystander videos that were posted on Youtube and Twitter. Although the fight was fierce, the spokesperson for the local police said no arrests were made regarding this incident.

However, another incident that occurred only about one-quarter of a mile from the main stage did receive Police attention. In this incident, four men were involved. According to police records, four young men were in a physical altercation that resulted in a 21-year-old man being stabbed in the abdomen and the legs. Police stated that his injuries were potentially life-threatening and he is currently in the hospital. Another 20-year-old man was stabbed twice in the back and also is receiving medical attention. The Police arrested a 19-year-old suspect but also believe that a second perpetrator alluded arrest and is currently being sought for questioning.

Kehlani had already announced her feeling about the situation as she published the following on Twitter regarding the day’s events.
“San Francisco Pride has been rude all day,” she wrote on Twitter. “Didn’t expect any of this. Don’t want to cause a situation because I really care about this community but stay away from Pride if your heart isn’t in it. San Francisco deserved better today. & the cops are out fully strapped…get.home. safe.”— Kehlani (@Kehlani) June 25, 2018