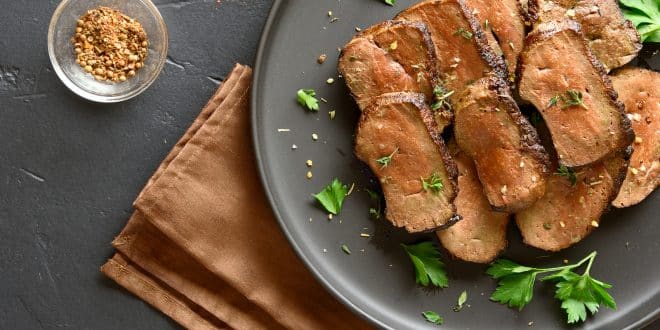 Many people wonder if organs are healthy meats to eat. The Paleo Diet community has long held organ meats in high dietary regard. However, most other people still don’t appreciate how vital these superfoods are to a regular diet. People most commonly eat the organs of cows, chickens, lamb, pigs, goats, turkey, and ducks.

The liver is the most consumed organ while the heart comes in second place. In this article, we discuss whether or not eating the liver is healthy for humans to eat, and, if it is, how healthy is it.

Is Consuming Liver Good for You?

Technically, the liver is considered “offal,” which is derived from the term “off fall.” Offal is any portion of an animal that falls from the carcass as it is being butchered and includes the organs, testicles, feet, and tail. The liver is also referred to in some cases as a variety of meat or pluck.

Many Americans are not accustomed to eating organ meats, with some of them assuming that it is unhealthy or even “gross.” According to an article published by Forbes, liver is considered to be one of the most repugnant foods by most Americans.

The liver has an earthy and mineral-rich flavor to it, especially if it’s overcooked, so it does take somewhat a required taste. Nevertheless, it’s not merely the taste of the liver that disgusts people; its role as a detoxification system might very well be the biggest issue for many people.

Unlike other offal meats like the brain and intestines, which are known to be harmful to humans if not cleaned and cooked correctly, the liver doesn’t possess any harmful properties. Interestingly enough, even though the liver contains a relatively high amount of nutrients, Americans are just now beginning to learn how much healthier the liver is than muscle meats.

For one, the liver is the most nutrient-dense organ of the animal. Secondly, it’s an excellent source of vitamin A (retinol), which is excellent for promoting eye health and reducing diseases that cause inflammation like arthritis and Alzheimer’s.

To sum it all up, the liver, especially from cows, is most likely the most nutritious food on the planet.

Other Benefits of Eating Liver

When it comes to the beef liver, in particular, it provides an extensive nutrition profile that can’t be rivaled by any other food on the market, hands down. Below are a few more reasons why you should start considering adding beef liver to your diet. 1. Highest Nutrition Profile Per 100 Grams (Raw Weight) Than Any Other Meat

Contains Choline Which Is an Essential Nutrient

Beef liver provides choline, an essential but hard-to-get nutrient that is a source of methyl groups required for completing many steps in metabolism. It’s also vital for synthesizing phosphatidylcholine and sphingomyelin, two principal phospholipids requisite for cell membranes.

Choline was once referred to as vitamin B4 but is no longer considered to be a vitamin. However, it closely resembles a vitamin and has a broad range of nutritional functions in the body. The adequate intake (AI) level of choline for adults over 18 years of age is usually 550 milligrams per day.

The problem for many Americans these days is, though many foods do have certain amounts of choline in them, they don’t get enough of it in their diets. Amazingly, it only requires three ounces (85 grams) of beef liver to get 356 milligrams of choline, which is equal to around 65 percent of the recommended daily amount.

The only other food that can somewhat compete with the beef liver is egg yolk.

Beef Liver Provides You With a Great Source of CoQ10

The beef liver offers you an endless source of Coenzyme Q10 (CoQ10)—3.3 milligrams per 100 grams on average. CoQ10 is fat-soluble and vital in providing the body’s cells, acts as an antioxidant, and enhances the rate of chemical reactions that occur within the human body.

Furthermore, CoQ10 plays a huge role in treating a wide array of health conditions, such as type 2 diabetes and hypertension.

In closing, even though you might not like its taste, liver (especially beef liver) offers you a wide range of health benefits. If you’re looking to increase the number of healthy foods you eat, give the liver a try.

Share
Previous Tips for Staying Calm During the Holidays
Next Does Your Restaurant Consider Food Allergies? If Not, You Had Better