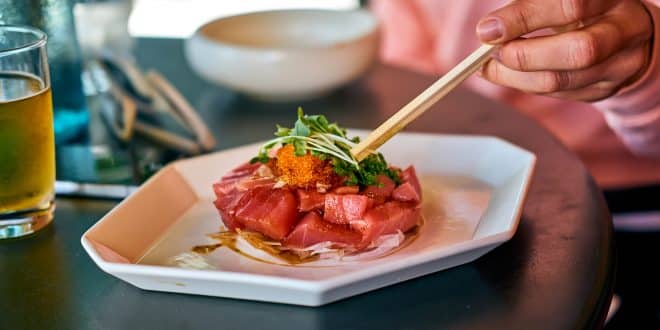 Eating Poke Can Be Bad For You, Here is Why

Totes Newsworthy would like to inform many readers that the consumption of many Pokes or Sushi may be extremely harmful to your health. At first, it may seem like a very healthy protein, but what is the drawback. You think its fish and that should be healthy. Well, in theory, it may have some issues. This article explains why eating Tuna may cause health issues.

Poke is a traditional dish from Hawaii, which is made from diced raw fish, most commonly yellowfin or “ahi” tuna, or (octopus). Its other conventional ingredients are soy sauce, seaweed, chili peppers, sea salt, sesame oil, and cinnamon (a condiment made from roasted candlenut and salt), served over sushi rice. There has been an assortment of adaptations that have followed in the footsteps of their traditional ancestor’s rise in popularity over the past six years. These modern versions of the dish can include the use of teriyaki sauce, mushrooms, crispy onions, and pineapple. In Hawaii, the recipe can be found at any number of places, and it is becoming more and more popular in the mainland United States.

One of the main reasons for the rise in Poke’s popularity is the fact it appeals to those who are following a Paleo diet or those who are more health-conscious. This is due to the high levels of omega-three fatty acids, B vitamins, and protein found in ahi tuna. As its popularity has risen, however, health professionals have warned about the potential dangers of consuming too much poke.

Ahi tuna, which is also one of the most common ingredients in sushi, is already listed as a high-mercury fish that should be eaten sparingly or not at all. On top of that, it has been calculated that the amount of mercury found in these fish has been rising at about four percent per year. With the rate of popularity for tuna poke bowls ever-increasing, this means many people are consuming way more of this fish than recommended and putting far more than they anticipate into their bodies.

Previous Back to Basics: Helpful Tips for Living Off the Grid
Next Eat More Intelligently and Live longer