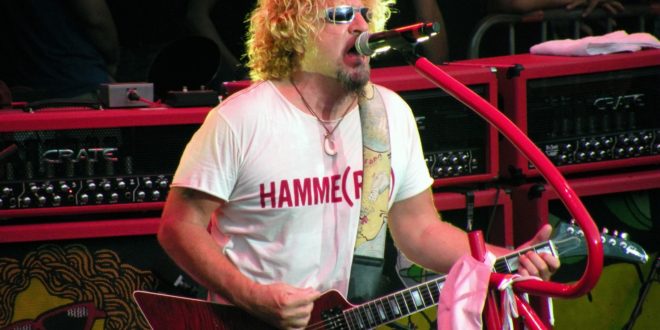 Despite the devistation of Hurricane Odile, Sammy Hagar has cancelled his birthday at Cabo Wabo in Cabo San Lucas, instead of postponing it. Totes Newsworthy reports how locals are outraged.

Despite the devistation of Hurricane Odile, Sammy Hagar has cancelled his birthday at Cabo Wabo in Cabo San Lucas, instead of postponing it. Totes Newsworthy reports how locals are outraged.

Every October, fans of the Red Rocker flock to Cabo San Lucas to see Sammy Hagar perform at his Cabo based bar, Cabo Wabo. The tickets are now sold online, so concert attendees have their tickets and get to Cabo ready to have a great time and enjoy the destination. In the past, tickets were free, and fans would camp on the streets of Cabo waiting for the ticket box to open at 7 a.m. The streets played host to an all-night party where tents, beds and sites were set-up and fans who are all like a large family as they have all frequented the event for years, would have a great time.

The event was largely popular amongst Los Cabos local businesses and charities as well. Amigos De Los Niños hosts an annual booze cruise, beach party, and attains raffle prizes and auction items that are popular amongst Sammy fans. This year however, the concert was cancelled due to hurricane Odile.

The airport in Los Cabos is closed, due to damage from hurricane Odile that hit Los Cabo on September 14th 2014, Totes Newsworthy Reports. The category 4 storm was the most powerful to ever hit the Baja on record, and it caused damage throughout the state. Many resorts, restaurants and other local businesses are closed for repairs, but many are already open and more are opening daily.

Sammy Hagar has been a large supporter of Los Cabos for years and has helped the community quite a bit. He has also benefited from the name and brand Cabo Wabo that, of course, is inspired by the popular destination. However, a large majority of the local population is quite unhappy with the cancellation of this event. It is true the airport is closed and fans cannot get there, but this is to celebrate a birthday party, so it could be postponed until the airports are open. Instead the Red Rocker will host this event at his Las Vegas restaurant/bar.

At a time when the community of Cabo which relies heavily on tourism dollars and needs the most help, the locals feel like Sammy has turned his back on Cabo. Instead of hosting a birthday/hurricane Odile relief fund to assist the thousands of locals who literally lost their homes and all their possessions, the birthday goes on in Vegas…There are hotel rooms in November that will need to be filled, restaurants needing patrons, empty seats at bars. In order to revitalize the economy after this devastating storm hit Cabo, the destination needs visitors to normalize. It seems like this could have been a great PR move for Sammy which has now turned into a lot of angry locals bashing Sammy now and planning to boycott his bar and products.

From a reputation standpoint, it could have been handled quite differently, Sammy could have easily tried to re-schedule or make a donation and explain why he was moving. Although there are valid reasons, airport closure, and noticeable damage, it seems by simply rescheduling it would have been a great way to support the community when it needs it the most!