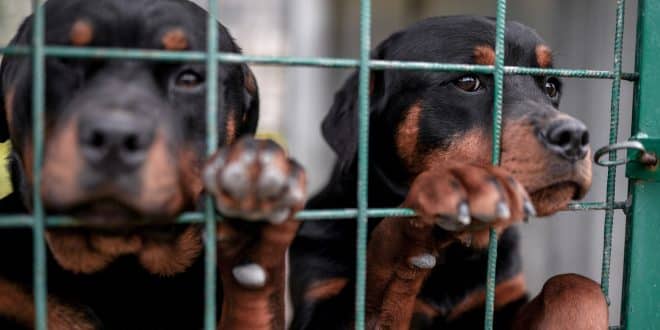 The Yulin Dog Meat Festival is a particularly gruesome event that has animal rights activists and especially Dog lovers from around the world fighting hard to end this vulgar event. Every year throughout late spring and early summer, thousands of dogs are rounded up throughout China and brought to Yulin to be slaughtered and eaten. On the summer solstice each year, these poor dogs are killed publically then cooked and eaten by local Chinese citizens. Do not assume that this so-called “festival” is an ancient Chinese tradition that has become embedded into the fabric of their history. That is not the case.

What is true, is that this horrendous event that includes estimates of more than 10,000 dogs being slaughtered and served up as meals, began in 2009 as a way for this city in Southwest China to bring more tourists there for the summer solstice. So stop and think about that for a moment. Politicians and event organizers in the town of Yulin, China are publically slaughtering thousands of dogs and serving them up to the waiting crowds all as a publicity event.

To make matters even worse, the transporting of the dogs to the festival is also an intensely brutal operation. The dogs that are killed for Yulin “festival” reportedly come from as far away as central and north China’s Henan and Shandong, which is many miles away. According to eyewitnesses, the dogs are stolen from homes, loving families, and straight off the streets. They take the dogs and overcrowd them into wire cages. The dogs are denied food and water for days, and they crammed so many into the crates that the dogs cannot move at all during the exhausting trip.

Previous Employment Tips for Generation Z From a Retiring Executive
Next Diabetes: Five Facts Everyone Should Know About Diabetes